A 23-YEAR-OLD, who once walked ahead of her fiancé in public due to fear of judgement, is showing the world their love is genuine – despite him being twice her age

May Rahim, 23, and Richard O’Hare, 49, from New York, have been in a relationship for two years, but they only went public earlier this year.

May told Barcroft TV: “I just want the world to know who I love and not judge me, but people are going to judge me regardless.”

The couple met by chance when May was lost, and Rich offered her a lift.

“I took a ride from a stranger – don’t do this at home kids!” May said.

Realising the danger in the situation, May was quick to show Rich her handbag full of pepper spray and her martial arts card.

Whilst Rich was driving, May was quick to notice he didn’t wear a wedding ring.

What followed was a teenage-like romance of long phone calls and endless text messages.

Rich said: “May is one of a kind – her personality gives me a new outlook, a different outlook.”

May added: “We’re best friends, we can do anything and everything together.”

Initially, May felt too anxious to reveal her new relationship to the world so they kept it a secret – to such an extent that she would walk ahead of him in a grocery store.

“I really just didn’t want to be stared at.” May explained.

However, she realised how difficult it was for Richard and how much it bothered him keeping their relationship in the dark.

“I could see that it hurt him, it’s a part of anxiety I have to kick because it’s hurting the man I love.”

At the beginning of summer, May found the courage to post a photo online of Rich and herself with a story on their relationship and their differences.

Since then, the couple have received a mixed bag of reactions. Whilst some people have been very supportive, they have also faced judgement from friends, family and strangers.

May said: “I had a lot of immature friends that would say stuff [about Rich] being my sugar daddy.

“First of all, he’s not my sugar daddy, I really love him, and Rich is not rich enough to be a sugar daddy.”

Strangers felt they had a right to judge the relationship too, often commenting or staring when May and Rich were out in public together.

One man referred to Rich as May’s father, something he was able to brush off.

Rich said: “If that’s the worst they’re going to say then oh well.”

But although this has been relatively easy to ignore, the comments that strangers have left online has been far crueller.

May and Rich aren’t only in an age-gap relationship, but an interracial one too, which has made some insults more sinister.

May said: “No one has said anything that terrible in person, but the internet is a different story.”

On one Facebook post, someone called May a ‘bed wench’, a derogatory term dating back to slavery times.

“It’s hurtful,” May said in reference to the comment.

“But I was so happy with the love that I was getting that I thought, you’re really taking out time to write that whilst we’re living our best lives?”

Rich’s family have been a consistent support system for the couple, who May met for the first time last year.

Rich said: “It was probably pretty overwhelming for May because there were a lot of people there.”

However, May was a big hit, despite some being a little shocked by her age.

Linda, Rich’s older sister, was surprised when she heard how young her brother’s new girlfriend was.

Linda told Barcroft TV: “I was a little concerned because [of the] age difference – that she would find somebody closer to her in age. That did worry me.

“But I see how they are together. I just hope they have enough respect and fortitude between them to keep it going.”

For now, May and Rich are happy sharing their relationship with the world and continuing to vlog on their YouTube channel, despite the judgement that they may face in the future.

“I think overall, coming out on social media has been a really good experience for us,” May said.

Rich added: “We are just letting the world know who we are and that we’re not going to hide.

“I believe the future holds us being together for the rest of our lives, and weather any challenge we encounter.” 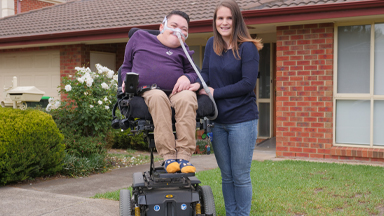 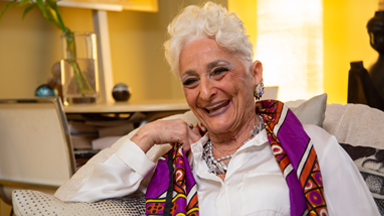