A GIRL who transformed herself into a “human rainbow” after overcoming severe depression has spoken out about her journey. After moving from her native Singapore to America in 2010, Kristina went through years of depression – even spending a week in psychiatric care

A GIRL who transformed herself into a “human rainbow” after overcoming severe depression has spoken out about her journey.

After moving from her native Singapore to America in 2010, Kristina went through years of depression – even spending a week in psychiatric care.

But after becoming pregnant during her high school years, Kristina was motivated to express herself through a unique rainbow fashion style in order to inspire her son, Enzo, to live an authentic life.

Kristina, now 23, told Barcroft Studios: “Before I found out that I had my son I literally didn't know what I was going to do with my life. I thought I would just take the safe route and do what my parents wanted and become a nurse or something.

“The birth of my son pushed me to wear colorful extravagant clothing because I want to teach my child to not let anything hold him back from doing anything that he wants in life.

“Clothes aren’t really just material things to me, they are also things that can change your mood. Clothes can be really emotional things for a lot of people.”

Based in Austin, Texas, where she lives with Enzo, now five, and husband, Edgar, Kristina now regularly decorates herself in extravagant and unique pieces inspired by Japanese street fashion.

She usually buys at least one new piece for her wardrobe a week and wears her fluorescent outfits for such everyday tasks as taking Enzo to school and running errands.

“A lot of my style is inspired from Harajuku fashion from Japan,” said Kristina. “I really love Decora fashion, which is one of the sub-genres of Harajuku fashion, and basically you kind of just decorate yourself.

“My personal style is basically a mash-up of all the things that I love – mainly rainbows. I love rainbows so much and so I wanted to embody the whole rainbow vibe. Just imagine if a rainbow was a human being, that would be me.”

Wearing such expressive outfits comes with its share of work, with Kristina regularly taking around two hours to get ready, and on one occasion spending a full four hours on her look.

And even though she gets her share of attention out in public, she says even the negative reactions don’t phase her.

She said: “I get stares when I'm outside and I'm like, ‘What are they looking at?’ and then I remember, ‘Oh right, I am wearing colorful clothing.’ But to me this is my normal now because I wear these clothes every single day.”

Husband, Edgar, doesn’t share his wife’s passion for eye-catching attire, and the couple’s wardrobe is a striking juxtaposition between his muted tones and Kristina’s multi-colored array of garments.

Still, Edgar is fully supportive of Kristina’s passion, saying: “For Kristina to dress the way she does it means expressing herself, making herself feel comfortable, and having the freedom to express herself.

“Her style is very unique. I see when we go out we get a lot of attention than before she dressed this way. It’s starting to grow on me.”

And it’s not just going out that attracts attention. Kristina has gained a significant following online, where she has racked up almost 26,000 followers on Instagram as ‘cybr.grl’.

But her transformation from depressed teen to rainbow queen was a long and often harrowing journey that saw Kristina struggle through some truly dark moments.

She explained: “The move to America was a really big drastic change for my family and it was after the move that things went downhill really fast.

“I had a bunch of issues – a lot of personal stuff going on – and that was when I found out I had depression and it was really a rough time in my life.

“It was a very lonely time period. I isolated myself from a lot of people and it led to a lot of running away from home and a lot of suicidal thoughts and self-harm.

“I didn’t end up finding help until it was really bad. I ended up staying in a mental institute for teenagers for about a week, and that time in psychiatric care kind of changed everything.”

Through therapy and sharing her story with others who were going through a similar experience, Kristina gradually overcame her darker years.

But it wasn’t until her pregnancy, during which she spent a lot of time on blogging site Tumblr, that she fully embraced and developed her rainbow style.

“Growing up, my style was definitely not very colourful,” she said. “So after that whole dark, deep depression I ended up finding out that I was pregnant and it was a huge surprise.

“I was always just in bed on Tumblr all the time. And so I would see all these pictures of people wearing Harajuku fashion and I would think, ‘I wish I could dress like that.’

The answer was an emphatic ‘no’ and Kristina immediately sold all her clothes that weren’t colourful and began amassing a collection of unique, brightly-coloured pieces.

Edgar said: “I didn’t know what to think of it at first. She didn’t tell me she was going to go rainbow, she just got in my car with rainbow hair and I was shocked; I asked her if it was a wig.”

After five years of dressing in her unique style, Kristina is now modeling, recently featuring in a photo spread for the UK-based G_IRL Magazine.

“I am really excited to be featured,” she said. “Some of the shots looked really amazing so I’m very very excited to see how it all comes out.”

For now, Kristina is focused on maintaining her online following and continuing to model. But more importantly, she has learned to focus on the things that matter most. 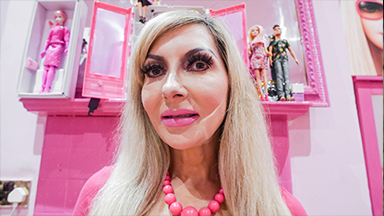 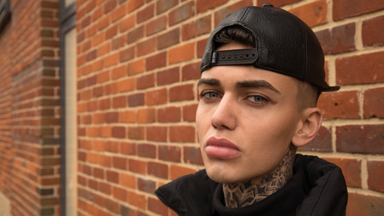