The couple initially moved from their large house in Dallas to a condo in Portland, and built the fire lookout property as a weekend getaway location in 2010.

But in May 2014 the pair decided to try living in the house full-time and now say they couldn’t imagine going back.

Dabney told Barcroft Media: “I never thought as an urban gay man that I could ever live out in an extreme rural area like this.

“When I lived in Dallas, I was a residential real estate broker. We lived in a great big house and we put on a starch shirt and tie, went to work in my Jaguar everyday, ate at very expensive restaurants, went to really fun parties.

“I liked it, but after a while it was like, ‘I need to do something else before I leave this planet.’ I didn’t want to go to the grave only having done that.”

Alan added: “Now, we can't even imagine living the way we used to live in Dallas ever again. It would be so stifled.”

Originally completed in 2010, the fire lookout house now sits at the centre of what the pair have dubbed the ‘Summit Prairie’, and is modelled after lookout towers used throughout the 20th century to spot forest fires.

The Pacific northwest used to be home to hundreds of these lookouts, but as technology has developed, many of them have been torn down.

Dabney and Alan’s own take on the iconic structure is designed purely for living, and features two levels with a kitchen and living area in the main room, and a ‘master bedroom’ on the second level.

The 388 square-foot structure sits at the top of four flights of stairs and offers incredible 360-degree views of the surrounding Umpqua National Forest.

Alan said: “We live according to the rhythm of the land rather than to live by an alarm clock.

“We don’t live that way anymore, we don’t own a clock and we don’t have an alarm that goes off unless it’s for baking pies.”

Alan and Dabney, who were married on the property four years ago, live almost completely off-grid, growing much of their own food in a small vegetable garden close to the house.

Alan added: “Like a normal house, we have running water, we have heat and light, we have LED lights run by solar. It’s off-grid so it’s not connected to the landline in any way. We do have access to the internet.”

The only thing missing from the main structure itself is a bathroom, but the couple have built a pit toilet in the woods, and added the male-centric “pee funnel” to the edge of the house’s decking.

Dabney said: “It’s just something about being 40 feet up in the air. I mean, it’s not just a view. There is just this other-worldliness of being up high and above it all and watching out over the air.”

Elsewhere on the land, the couple has built two smaller cabins where they stay when renting out the main house for the summer, as well as a wood-fire hot tub.

It’s easy to see why they say they don’t miss their old lives, beyond “some of the social things” as Alan puts it.

Dabney said: “I don’t want to say it’s for everybody but it worked very well for us. I wouldn’t trade the experience for anything.

“And some day we’ll have to move back to the city. Some day we will not be able to go up and down four flights of stairs every single day.

“But I will say this: I don’t think I’ll ever look back at this and go, ‘Well, what did we miss when we were out here in the woods?’ It will still be going on when we get back in the city.” 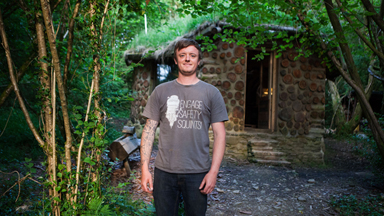