Eighteen-month old Gavin Silvestri was born with abnormal growth of cysts within the head and neck area.

Parents Victoria Silvestri and Joseph Silvestri say this condition is so rare it happens in only one in every 4000 births.

They are documenting Gavin’s story and sharing it on social media to help other parents who may be going through something similar.

Victoria told Barcroft TV: ‘Gavin is a special little boy because he is the light of our life.

‘He has changed the way we view life completely.

‘Changed our mindset on basically everything; how we live, how we used to do things.

‘We still try to keep it somewhat normal, but I mean he’s just completely amazing.’

The pair first discovered Gavin was going to be born different at the 18-week anatomy scan.

They attended the hospital to find out the sex of their baby, but couple knew something was unusual when the ultrasound technician went to get a doctor.

Victoria told Barcroft TV: ‘We were there to try to figure out if he was a boy or a girl and to measure all of his limbs and heart.

‘The ultrasound technician was doing her scan, everything was fine up until the point where she says, ‘Let me go grab the doctor.’

‘We didn’t think of anything of it until then, the doctor looked at us and told us he has some sort of mass – it might be what’s called a cystic hygroma or lymphatic malformation.

Gavin remained in hospital for seven months after he was born.

The couple were concerned about what the quality of life of their new child would be like.

‘When I first found out that Gavin would be different, I was terrified. I didn’t know what to think’, said Victoria.

‘Everything was worth bringing him home because as a parent, you don’t want to see your child going through that.

‘But at the same time, he had to go through all of the hospital challenges. It’s just who he is.

Victoria and Joseph admit people sometimes stare at Gavin, although they ignore it but welcome people to talk about his condition.

They are passionate about sharing Gavin’s story to raise awareness of lymphatic malformation.

‘When people stare at Gavin in public, I don’t really pay attention to it.

‘If they say, “Hey, what condition does he have?” I’m not going to be offended, I just want to raise awareness.

Since sharing their family’s story on social media, the couple say that many doors have opened to them.

Parents of other children with lymphatic malformation from around the world have contacted the couple asking for help and advice.

‘Thousands of people all over the world have reached out.

‘By having that feedback and having people reach out to me, I know I‘m doing what I wanted to do – raise awareness and help families.

‘Hopefully they didn’t feel as helpless as Joe and I did when we first started out.

‘Having a child with a visible difference has taught me life is previous.’ 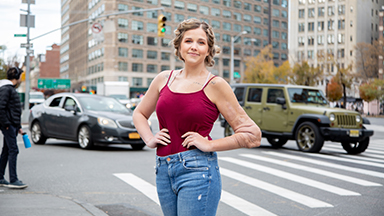 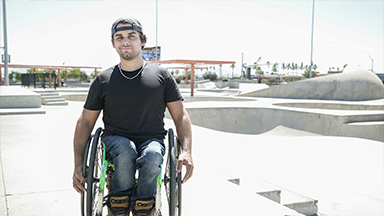