My Handbag Keeps Me Alive

FOR 24 hours a day, Lauren Spencer has life-saving medication being pumped directly into her heart

The 18-year-old from Lodi, California has a condition known as Pulmonary Hypertension – a form of high blood pressure that affects the arteries of the lungs and heart.

The 24-hour treatment is designed to reduce her pulmonary pressure and prolong her life, meaning the teen has to keep a mobile pump on her at all times, which she tucks into a handbag, to ensure the experimental drug Remodulin is continually delivered to her heart.

Lauren told Barcroft TV: “My pump is like a part of my body. It’s an extension of myself. It helps me live so it’s with me everywhere I go, it’s kind of like my friend.

“I take it everywhere with me. I mean, you can’t forget your heart. You can’t leave your heart at home, but I possibly could.”

Remodulin costs $15,000 a bottle, and Lauren uses four bottles a month – which, when combined with her numerous other medications, makes her overall treatment astonishingly expensive.

For now, the cost is covered by California Childcare Services, but in three years, when Lauren turns 21, that coverage will stop, giving Lauren and her family a tight timeframe in which to find an alternative way of paying.

“There is not a cure. They can only make us feel better,” explained Lauren. “Some people even become immune to the drug as time goes on, so this drug doesn’t work forever.

“I do believe there is hope for a cure. I believe if doctors are given the resources, a cure will happen.

“I guess I’m not scared because I feel like there is going to be a time where I would need to be scared and now is not that time.”

Mum, Tracy, said: “People are dying. Kids are dying. [Pulmonary Hypertension research] is a very narrow field that people do not pay a lot of attention to, although it’s on the rise.

“It takes hundreds of thousands, if not millions of dollars to develop these drugs and run clinical trials. That has to happen now if we are going to save anybody’s life.”

Despite these overwhelming odds, Lauren has remained positive, and was recently accepted into San Francisco State University’s nursing programme, where she will learn to help others with her condition when she starts this autumn.

For now, Remodulin is helping to keep Lauren’s pulmonary pressure at normal levels. The pressure upon diagnosis was 67, and after one year on Remodulin, it has dropped to 26 – a life-saving change.

But the pump and tube must always remain dry, which stops Lauren swimming, and also means she has to take major precautions before, during, and after showering – a process that means a shower can take her an hour and a half.

The tube must also stay connected to Lauren’s heart in order for the medication to maintain it’s effect, something that isn’t always easy to monitor.

Lauren explained: “In the event that my tube is ripped out, the only thing I could really do is put pressure on it, try and stop the bleeding, and get to the hospital as fast as I can.”

She recalled one frightening incident when the worst happened: “I was almost asleep, and I had to force myself awake cause I rolled over and I felt that my shirt was wet.

“It was pitch black, so I was really confused – at first I thought it was fluids from my pump. I ran to my light switch, flicked on the light, looked in the mirror, saw that there was blood all over my shirt.”

Luckily, Lauren was able to contact her doctors, who advised her to push fluid through the tube to remove air and reattach it.

“I thought that by the time I actually realised that it was blood and not water, there was already air in the tube and it’s already in my artery,” continued Lauren.

“There is fear that if this happens again that it could be worse. Fatal.“

Lauren’s father, Joe, passed away from Pulmonary Hypertension at the age of 36, when Lauren was just nine years old.

Lauren was then diagnosed with the deadly condition at age 16, despite doctors initially telling Tracy it was impossible for her husband to pass on the PH gene to his children.

“I asked Joe’s doctors extensively whether this could be genetic,” explained Tracy. “The answer was no, emphatically no.”

After Lauren starting showing signs of fatigue and shortness of breath in her younger years, Tracy became concerned.

Repeated efforts to gain a diagnosis for her daughter’s symptoms eventually yielded the devastating news that Lauren had the same condition as her father, and had a life expectancy of between one and five years.

The hope is that Remodulin will prolong Lauren’s life before she requires a lung transplant, or a more effective treatment is discovered.

“I would hope that within her lifetime, we are going to find a cure.” added Tracy, who has worked tirelessly to support her daughter since the diagnosis.

For now, Lauren is training up a service dog, Ruby, which will eventually be able to detect if Lauren’s tube becomes detached and alert her and others.

“My outlook has changed since I was diagnosed,” said Lauren. “I don’t let myself have inhibitions about doing what I want and love to do.

“A lot of people push things into the future like ‘oh I will get to it eventually,’ but for me, if I want to learn to do something, now is the time to do it.

“I think everyone should live that way, not just people who may have a shorter life span, because then we would have awesome lives, not being afraid of what people think of us.” 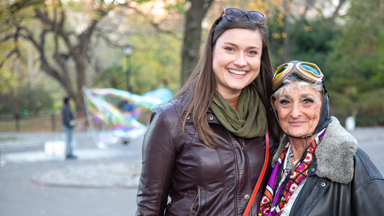 My Handbag Keeps Me Alive