Flippo: hippo flipped into the air by elephant

This fully grown hippo was flipped several feet into the air as she stood her ground against an aggressive elephant bull, giving her calf time to scamper to safety.

Amazingly, the mother emerged relatively unscathed from the attack, apparently suffering nothing worse than a little gash on the side of her body and a rather bruised ego.

The scene was captured by wildlife photographer Rian Van Schalkwyk, 40, at the Erindi Private Game Reserve in Windhoek, Namibia.

"I felt incredible privileged to see this. I've been in the bush a long time, but this was the most spectacular scene I've ever witnessed, I couldn't believe it," the South African said.

Van Schalkwyk, who works as a GP in Rundu, a small town in the north east of Namibia, on the Angolan border, was spending a long weekend at the reserve with wife Bonnie and a host of other family members.

The spectacular scene unfolded on Sunday after lunch, when all of the other guests had gone back to their rooms for a snooze.

From the vantage point of a restaurant viewing deck overlooking a water hole, the photographer and his loved ones got a private view of this incredible animal interaction.

"I was taking photographs of the hippos in the water but because of the ongoing drought the staff came and put some grass out them, because they had nothing else to eat," Van Schalkwyk said.

"Immediately about twenty hippos came out of the water and started grazing.
"The next moment a large elephant bull came charging out of the bush in a rush - it was going for the grass as well."

The elephant was initially happy grazing alongside the hippos, who kept their distance at first, but became agitated and flapped his ears frantically when they began to venture closer.

When the hippo mother in the pictures strayed just that little bit too close - and held her ground - the elephant decided to take drastic action.

Although adult female hippos can weigh upwards of 1.5 tonnes, the cow was dwarfed by the male elephant - who was able to flip her with his trunk with ease.

"She landed on her back and rolled 360 degrees down the embankment towards the water," Rian said.

"Afterwards, the elephant just stood there and shook his head. The hippo retreated into the water.
"The calf ran away towards the other hippos and the mother stayed in the water for about five minutes before eventually coming out.

"It was incredible. It happened so quickly - elephants are incredibly fast over short distances.
"I felt very sorry for the mother trying to protect her young. It was quite emotional to see her go to those lengths, to stand her ground against a much bigger animal.
"You could see in her whole demeanour that she was quite taken aback. Even the elephant seemed like he was thinking about what he did."

The mother and her calf were quickly reunited but far from being lavished with sympathy, her fellow rhinos acted aggressively towards her and she was forced to retreat with her baby and stand apart from the herd.

The elephant's mood did not improve much, as he carried out a handful of mock charges on other hippos before venturing into the waterhole to chase away a few sunbathing crocodiles.
The grumpy giant then treated himself to a dust bath before departing, leaving the hippos to finish grazing in peace.

"For me, it was the experience of a lifetime," Van Schalkwyk said.

"I felt privileged to see animal behavior like that, but I also felt for the mother. All of us just stood there for a while afterwards not talking, just taking in the scene."

Flippo: hippo flipped into the air by elephant 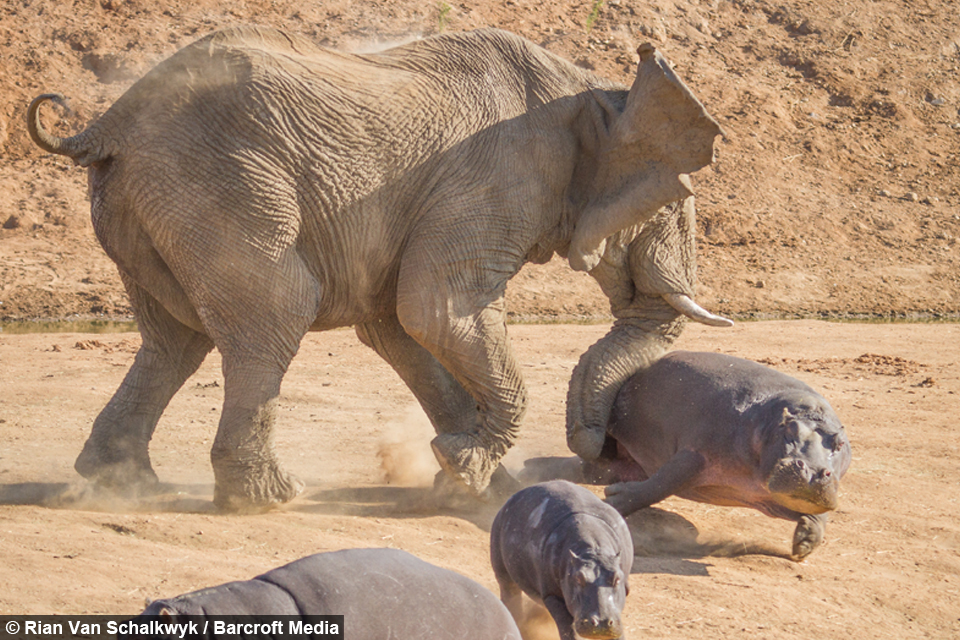 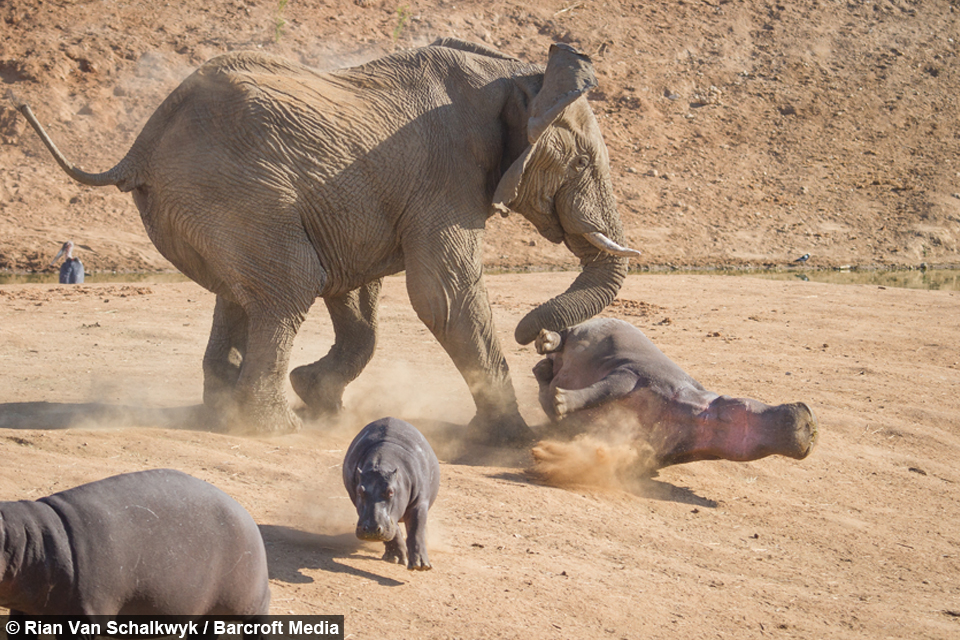 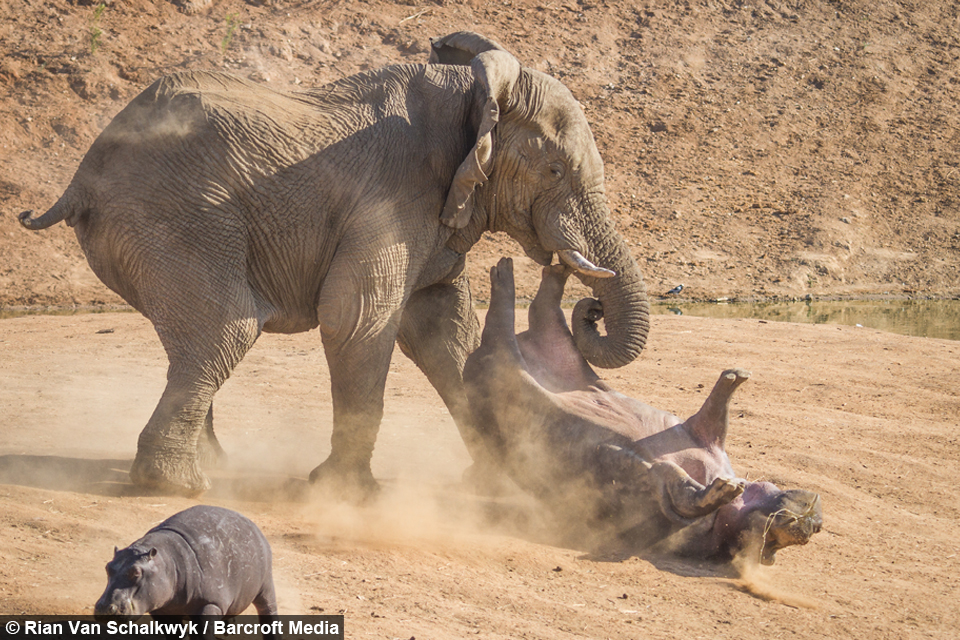 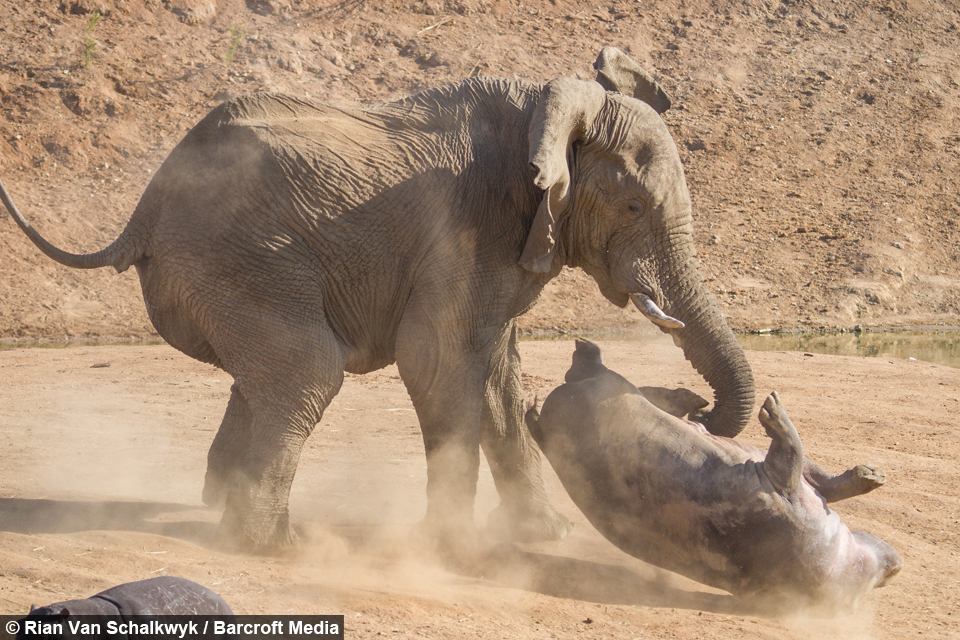 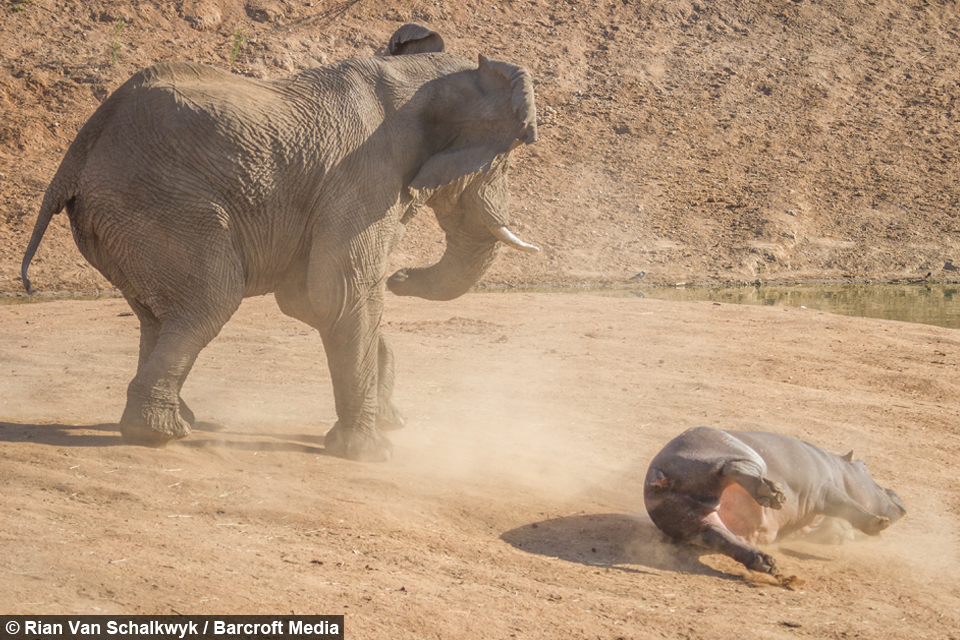