By Stephanie Stijkel and Tom Midlane

Beatriz Pugliese, 25, from São Paulo, Brazil, underwent over 30 surgeries from the age of six months to reduce her birthmarks, as they are prone to cause skin cancer.

Her condition, also known as a giant congenital melanocytic nevus, is so rare that it affects just one in 500,000 people.

Despite experiencing some bullying at school, Beatriz didn’t let this get to her and says she’s always had a positive attitude as her family always encouraged her to not cover up any of her birthmarks but embrace them.

Beatriz told Truly: “Never stop yourself from being who you want to be because of the judgements of others. I am sure that I would not be the person I am today if I had normal skin.

I think the condition resulted in me developing my character and my courage to confront life’s challenges.”

The 25-year-old became a role model for others with similar skin conditions and attends a yearly meetup with other Brazilian people who have nevus birthmarks.

They wanted to get help and advice on overcoming things.” Today, Beatriz works as a biologist and recently married her husband Fellipe who she met during the 2014 World Cup in Brazil. 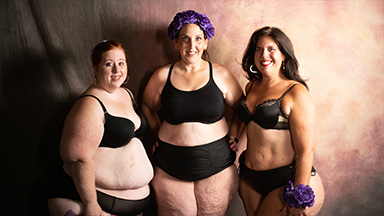 I Won’t Be Ashamed Of My Giant Thighs