The Champion Pole Dancer With Only One Arm

Australian Deb Roach was born without her left arm and faced a number of challenges growing up.

Deb grew up in Sydney, Australia, where she says accessibility and inclusion were never a strong focus of the schooling system.

“At school kids were given the option to pick people to join their teams. I was always the last picked,” she explained.

“I focused really on my academic and my cerebral pursuits and got very trapped in my head for my teenage years.”

After starting work in her twenties, Deb began joining colleagues at the gym during her lunch breaks, quickly becoming addicted to exercise and fitness.

But it wasn’t until she began stage-dancing and DJing at a club and saw a pole dancing double act perform that she decided to try something new.

She said: “They blew my mind. We were backstage and I said, ‘You lucky girls, with your two arms and your fancy pole dancing, that was insanely good’.”

The dancers then asked Deb if she’d ever tried pole dancing. She continued: “I’m like, ‘Why would a girl with one arm try and do what you guys are doing up there?’

And they challenged me. They said, ‘Why not?'”

Taking them up on their challenge, Deb was in the dance studio within days and, despite some early frustrations, never looked back.

“Things like climbing the pole took me a lot longer because my teachers had always trained with two arms and it was a pretty new sport back then,” she explained.

But Deb quickly took to performing, taking traditional pole moves and making them her own, and eventually quit her job to join the fitness world full-time.

After winning local pole competitions, she was asked to compete in the disabled category at the 2012 International Pole Championships in Hong Kong.

“I ended up going there, then I won,” she said. “That’s when my mind was absolutely blown. There was recognition that I never dreamed of.”

Following her success at the competition, Deb began receiving invitations to attend events around the world, and now travels the globe performing and teaching – even going on to win the disabled title at the International Pole Championships for a second time in 2015.

But Deb, who sees pole dancing as 'a vehicle for personal growth and transformation,' does have to win over some of her students.

She said: “There are definitely some shock reactions. Students that can’t believe that they are in a room with one-armed pole instructor."

But, for Deb, being able to share her talent with others is one of the most important aspects of being a pole dancer.

She said: “The thing I love most about pole dancing is actually in teaching. It’s about seeing people who came in with fear that they weren’t strong enough."

Deb’s students, who range from grandmothers to doctors and lawyers, are similarly positive about their teacher’s abilities.

One student, Emma, who joined Deb at a recent session at the London Dance Academy said: “I can barely do it with two arms. So, the fact that she is doing it with one arm is really, really impressive.”

And having already overcome so much to become a world champion dancer, Deb is willing to fight the lingering stigma attached to pole dancing.

She said: “There are still people out there that believe pole dancing only exists in a strip club. But there are ignorant people all over the world.

“If they want to look at me and think, ‘Oh, she is a pole dancer, that means she is stripper,’ more’s the pity because they don’t get me.”

“I am a woman doing something taboo and reclaiming my body for myself in a safe environment, where I‘m not told that the fact that I am pursuing my own sexuality means that I am lewd, crude or a slut. And I think that that’s a really positive thing." 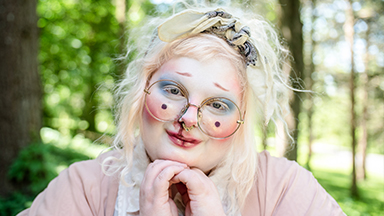 The Champion Pole Dancer With Only One Arm