Sharing Our Girlfriend Saved Our Marriage

The couple married 5 years ago and had 3 kids together.

But their traditional monogamous relationship changed two years ago when the couple met Keila Perez, 32, and welcomed her to their relationship.

Keila has four kids from her previous relationship, which means the throuple now have eight children.

Matt told Barcroft TV: “I've never seen a poly relationship in my life, it's always been just a man and a woman.”

Ashley brought up the idea about having a polyamorous relationship to Matt after realising that their marriage started crumbling.

Ashley said: “Initially it started as me opening the relationship between me and Matt or suggesting trying to figure out what was next for us when we were having hard times.”

Ashley continued: “I had only ever been with Matt since I was a teenager.

“I'd always been curious about women as well for different reasons.

“Also, I was just missing the friendship, wanting to have a really good friend and somebody that we can hang out and do girl stuff with besides just hanging out with my guy.

“I and Matt were going through a lot of things.

“I thought maybe it would be a good idea to try something completely different.”

Matt and Keila Perez, 32, met online and the two of them became good friends.

Soon after the two formed friendly relationship Matt opened up to Keila about a polyamorous relationship.

Keila admitted that at first, she was unsure about polyamory.

She said: “Having feelings for both a man and a woman, for me, in the beginning, was a little bit confusing.

“It was very scary.

“And especially when you come from a very strict religious family as I did.”

Keila added: “Everything is equal – there's no first wife, second wife and our kids are all treated equally.”

At first, their triad was met with criticism, especially from other family members.

Ashley told Barcroft TV: “My parents were really shocked by all of this.

“I never really disclosed to anyone that I was interested in both women and men.”

Ashley’s mum, Deborah Schmidt, told Barcroft TV: “It was hard for me to comprehend something like that.

“I was surprised that my daughter had an interest in women.

“I guess I was angry at myself that I didn't realise that after all these years.

“I mean, that's my daughter.

“It took me a little bit of time and I adjusted, I came to deal with it as it's making her happy.

“It's what she wants and that's what's important.”

Matt and Ashley wanted things to be equal between all three of them and got a divorce a year ago.

Keila, who has four kids from her previous relationship, moved in together with Matt and Ashley and the throuple have started their own business – a bakery shop.

They have recently welcomed their eighth child.

The three now live together as a family with their eight kids and Ashley’s parents.

Keila said: “We have our kids and we're building something together as a family, we have the same goals.”

Ashley said: “I'd say Kayla is basically like a second mum to our kids.

“She fills them where I lack certain things.

“It's a really nice feeling to have that friend that you can talk to, in addition to your partner and your husband.

“I wouldn't say there are drawbacks to the poly relationship so much.

“I mean, there are obstacles that we go through for sure.

The throuple share the same bed and consider themselves as equal partners.

Matt said: “Sexual pleasures are definitely a lot more where there are three people involved.”

“I feel that now, after two years of being into the relationship, it feels like a normal relationship.”

For some, polyamory seems extreme and rare despite the polyamorous relationship growing in popularity.

Matt said: “I don’t care what people think – we’re still going to do it if we want to, that’s just who we are.”

Ashley said: “The three of us wouldn’t work without one of us.

“It wouldn’t be the same, something will always be missing because this is how we've come to love each other.

“I would definitely say our love is extreme love, not everybody can handle what it takes to have a three-person relationship but I wouldn’t say that it’s so extreme that nobody else should consider it because it can be a really beautiful thing.”

My Girlfriend Identifies As A Cat 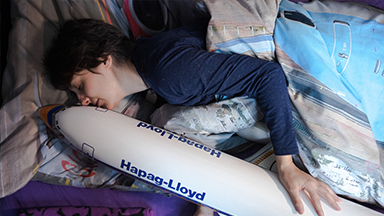 I’m In Love With A Plane

Sharing Our Girlfriend Saved Our Marriage