GOING off-grid is something many dream of, but one former Londoner has actually followed through on his dream of living in a self-built house in the woods

Kris Harbour, 31, gave up his job, house, a flat he owned, and a busy social life to move onto a plot of land in the welsh countryside, which he bought on Ebay.

Once there, using recycled, natural, and found materials, he began building his own round cobwood house from scratch, in which he now lives full-time.

Kris told Barcoft Media: “The idea of working for two thirds of your life and having very little time to socialise and do hobbies, it just doesn’t sit right.

“At one point I had two mortgages which I think totalled nearly £400,000, I had a car, and all the bills and mortgages, electric, water, internet, TV licenses, insurances.

“I earned good money but everything just went, everyone had their hand in my pocket until there was nothing left.

“Even though I don’t earn much now, I probably have more money now then I did then.

“I don’t have any commitments that I have to worry about and just knowing that that’s the case makes me a lot happier.”

The former lift engineer previously owned a house and a flat in London, where he worked full-time up until May 2015.

But feeling unfulfilled, he decided to give it all up, and using the money he gained from selling his property, bought an 18.5 acre plot of land in South Wales.

Kris said: “I had a fairly normal life in London. A normal day job where I’d get up, go to work, socialise on the weekends.

“It was kind of unfulfilling and I felt like I didn’t have enough time to do all the different things I wanted to do.

“I never had time to do them or I was too tired even if I did have time, and over the years it made me very unhappy.”

After selling his home and buying the land, Kris spent the next year and a half travelling to and from his newly-bought property to build his house, using wood and a mortar made of clay, sand, and straw.

He said: “I think the building is made of about maybe 90% of either natural, recycled, or found materials.

“There is some foam installation that isn’t natural in the roof. Then just things like screws, some pipes and fittings and things like that.

“Everything else is wood, sand, clay, straw and that’s it.”

A thousand man hours, around £4,000, and a year and a half after first buying the land, Kris moved into his new house in August 2017.

“When I first moved in it was the end of summer and I thought it was going to be quite a challenge,” he explained.

“I thought it was going to be pretty lonely and not that fun but I actually really enjoyed it.

“At no point was I wondering what I was doing or why I had done it. I was just really happy.”

The house itself was Kris’ first attempt at building a home, which he did almost entirely by himself, with some help from friends and family – though it took some time for them to get on board.

“My family thought it was probably a little bit crazy,” said Kris. “On the surface of everything I was doing quite well. I was successful, I owned two properties and had a good job in London.

“But I wasn’t happy, so I think they thought it was a bit crazy and I was a bit stupid for selling up because financially it was a poor decision.

“But for my well-being, it was a very good decision and it didn’t take long for my family to come round to the idea.

“I think, now, everyone’s pretty impressed with what I’m doing.”

The house itself features a self-supporting turf roof that helps the building blend into its woodland surroundings.

The home and Kris’ workshop, which he also built himself, are powered by hydro and solar power, so Kris can turn on the lights, boil the kettle, and even access the internet as he would in any other house – all while being completely off-grid.

Elsewhere, the enterprising 31-year-old used old windows from his mum’s neighbour’s house, and a glass fridge door he found in an alley to create the round house’s windows.

And although Kris and his former partner split up just prior to his big move, he now has a new girlfriend, Dot, who stays with him three nights a week.

“I wouldn’t want Chris to live in a traditional building. Living like this is really amazing. It’s interesting. There’s always something to do. And it’s very beautiful.”

Despite sometimes being woken up by a rogue bat inside the house, and the odd lone mouse invasion, Kris said he hasn’t had any issues with the building since he finished it.

He now plans to push ahead with turning his land into a fully sustainable homestead, and has ambitions to build a bigger workshop, and eventually a permanent two-storey home.

“I wanted to be able to live on this land for a number of years before I did major works like building another house because I wanted to see how the land reacted to different seasons,” he explained.

“I wanted to see what areas got flooded, learn where the sun tracks across the sky, so I would know, when I build the house that will hopefully be the house I will live in for the rest of my life, that it’s in the right place.”

Kris estimates his existing round house will last 20 years with minimal maintenance, and longer with more intense maintenance.

In the mean time, he is happy to be able to spend his days building new structures, maintaining the land, and surfing off the Welsh coast – all without a monthly bill in sight.

“My life is hundreds of times richer now. I feel more fulfilled and happier than I have ever been before.

“Someone asked me, what age would you go back to if you could go back to any age? And I thought, I probably wouldn’t go back, not even a month.

“Right now, I’m the happiest I’ve ever been.” 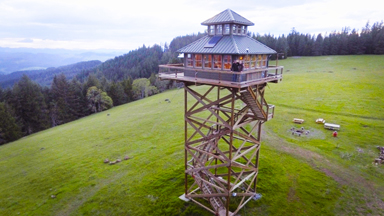