Overweight since he was a young boy, Jordan Grahm recalls being too embarrassed to take off his t shirt at pool parties in kindergarten.

Jordan told Barcroft TV: "I was always heavy. It caused a lot of bullying when I was growing up. I just knew that I was different.

“It made my life difficult to stand out and be that different.”

By the time he was 13, Jordan estimates he was 100lbs bigger than everyone else his age. His mother would encourage Jordan to lose weight but she unexpectedly died in her sleep when Jordan was just 14, and any hope of Jordan losing weight evaporated.

He said: “I was always close to my mum. She was always trying to get me to eat healthier, sign me up to a nutritionist, go on walks with me.

“It was out of nowhere [when she died] it made me really angry I think that anger and depression are really what fuelled me to give up on myself and my life. I didn’t think it was fair to lose someone.”

Angry with the injustice of his mother’s passing, Jordan’s depression propelled him to drugs, alcohol and by his own admission ‘mostly food’ to numb his pain.

"I tried to numb my feelings with drugs and alcohol but food was the one that really stuck the most.

“At that time, I was just slowly killing myself.”

Going to the drive thru at least twice a day, Jordan would consume 10,000 calories a day.

At the doctors, the regular scales didn’t go past 400lbs so Jordan had to step on special scales; at his heaviest he weighed 421lbs and the doctor warned Jordan if he didn’t make changes, he would risk losing his life before he even reached 30.

Admitting he “didn’t really want to live to see another day”, the doctor’s warnings went ignored. It would take another life-changing moment in Jordan’s life before he realised he had a reason to live.

Driving home one day, Jordan’s car was hit in a head on collision.

He said: “It took a moment of impact to change my life. I got hit head on by a drunk driver. I was banged up, I had a separated shoulder, a broken wrist but I survived. I knew that was a second chance at life. I did feel like that was my mum looking out for me: it’s not time yet.”

That night, on 30 March 2008, Jordan made a vow to change. The next day he woke up and started walking his dog Blackberry in the neighbourhood and began eating healthier foods.

A year later he had lost 100lbs and Jordan and Blackberry were a familiar sight and their walks had turned into sprints down the hill.

Jordan joined a gym and two and a half years after starting his fitness journey, he had lost 211-12lbs.

At his lowest Jordan weighed 209lbs but since then he has turned to bodybuilding and as he modestly puts it: “gained several pounds of muscle”, currently weighing 250lbs.

Aside from his incredible health gains, Jordan’s daily fitness walks also helped him find love. Neighbour Kelli had noticed Jordan and Blackberry on their daily walks.

“She had seen me out her window walking Blackberry up and down, back and forth she’s always hear the jingle of her little collar. One day she was walking her dog and I was walking Blackberry and we stopped and I started talking and she asked me out on a double date and I decided I should definitely go. After that we were inseparable.”

When Jordan had excess skin removal surgery, Kelli was right on hand, initially moving in temporarily to help with the recovery before making the move permanent.

The couple recently wed - with both of their dogs part of the ceremony - and are now looking forward to the next stage of their life: first up, running a half marathon together.

Jordan said "If you would have told the 400lb version of myself that this was on the cards – any of it – I would think you’re absolutely crazy.

“It’s such a big shift not just how you look but how you feel.” 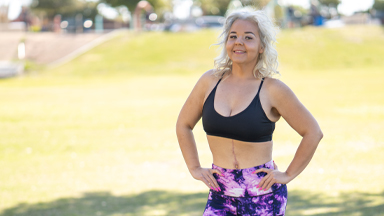 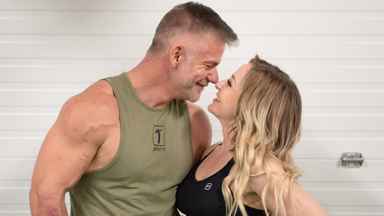