KAELA MCKENNA, 24, from New York City, has lost 109lbs all naturally, but for her, the biggest transformation is less to do with the weight she has lost and more the person she has become

From someone who would eat 50 chicken nuggets from McDonalds and hated the taste of vegetables to someone who goes kickboxing and eats a plant-based diet, Kaela’s lifestyle has done a 180. Kaela admits struggling with her weight gain, at her heaviest weighing 269lbs. After meeting her eventual wife Steph, the couple got married and live together in Long Island, NY. While both describe the wedding day as one of the happiest of their lives, they admit neither felt happy in the clothes they were wearing. Kaela’s size 22 wedding dress was encrusted with jewels on the back but when she put it on it was so tight she could barely move in it. As she smiled and posed for pictures, Kaela was all too aware of how uncomfortable she felt, both physically and emotionally in the dress. After being diagnosed by the doctor as pre-diabetic Kaela decided she had to make a change, trading the fast food joints for the keto diet. Although she lost weight, the keto diet turned out to be near-fatal for Kaela: a severe lactose allergy left her oesophagus in effect scabbing up, making it difficult to eat even soup. Kaela had to cut out dairy and eventually started eating a fully-plant based diet. Dropping over 100lbs, Kaela currently weighs 160lbs. Now her old wedding dress hangs off her and Kaela has set herself the goal weight of 145lbs, when she hopes to retake her and Steph’s wedding photos. Diagnosed with manic depression when she was younger, the healthy diet and exercise regime has also been a vital part of maintaining good mental health. Whereas in the past episodes of manic depression would either leave her, as a teenager, eating barely anything or, into adulthood, massively overeating, Kaela has finally found the equilibrium her body and mind both need. 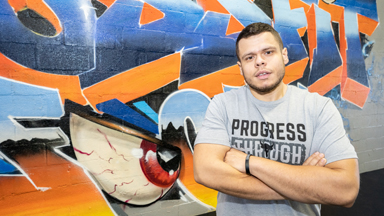