I Hid My Eating Disorder For 8 Years

A 28-YEAR-OLD woman, whose weight dropped to 88llbs at the height of her eating disorders, is publicising her story to show other sufferers that recovery is possible

Lindsey Hall, from Fort Worth, Texas, says her eating disorders first began when she was a teenager, alternating between anorexia nervosa and bulimia.

At college she once blacked out on a treadmill and would drink wine on an empty stomach to curb her appetite. Four years ago Lindsey went to an eating disorder treatment centre and says she is now in recovery – a process that she believes will last the rest of her life.

Lindsey, who now lives in Denver, Colorado, told Barcroft TV: “I don’t think anybody ever fully recovers from eating disorders. I think that you can let the behaviours go and I’m happier, but it still lives with me.

“As I look back at my journey one of the biggest things I've taken away from me is that it’s okay to not be okay.”

It’s this realness that has made her blog ‘I Haven’t Shaved In 6 Weeks’, so popular with fellow recoverers.

She said: “Whatever you are going through, I know it too. I have been there."

Even as a child, Lindsey says her relationship with food “has always been tumultuous”.

Lindsey said: “It was a big joke with my family that Lindsey only eats about 12 or 14 items of food. I ate French fries, I ate a lot of breakfast food, I ate waffles, oatmeal, eggs and a lot of cereal.”

Even though these early eating patterns weren’t “about the calories or carbs”, they established a distorted relationship with food that would continue into Lindsey’s teen and adult years.

She said: “My relationship with food really changed when I was in high school

“I definitely wasn’t the smartest girl in class, wasn’t the prettiest, wasn’t the most active or the sporty - but I was small.

“When I hit puberty suddenly I wasn’t the smallest person in the class."

She started to cut out foods and eat less. In her food diaries, Lindsey would not only precisely list what she ate - in one instance eating only one jelly bean and 10 pretzel bites in one day - but also document dieting rules and her feelings about her appearance and weight.

The first time Lindsey made herself sick, age 16, wasn’t even because of food but because she was on medication that made her nauseous.

She said: “I remember thinking I can’t miss this chemistry test and I can’t be nauseous for it, so I made myself puke

“A couple of weeks later I thought I had eaten too much cereal.

"I was like ‘oh, I remember how easy it was to get rid of it’ and that is where the bulimia part of my story started.

The cycle of food restriction and bulimia continued throughout her teenage years and then in the first week of college, one of Lindsey’s best friends suddenly died.

“I didn’t have a support system there so I found solace in the gym,” she said.

"I would turn off my phone, I would get a book and I would just sit on the cardio machines for hours, I would go once, twice, three times a day and it started becoming this obsession because I was losing calories that made me feel good about myself - but I was also completely blocking out dealing with my best friends death.

“I would exercise until I was light-headed, sometimes I would black out. I passed out on the treadmill once.”

She said: “I was doing a lot more half marathons and running frequently and running all the time, often two or three times a day.

Alongside her exercise addiction, Lindsey was suppressing her hunger by drinking.

“I drank to coat my stomach, I was so far into my eating disorder pattern that I just didn’t want to feel hunger."

Drinking alcohol to mask appetite has been referred to as drunkorexia. Although not an official medical term, drunkorexia also refers to those who save all their calories for binges.

However, Lindsey says that in her case “it was never about binge drinking”:

“Often times I would drink and then feel the need to work out. I would sit on the elliptical until I burned the entire glass of wine and it made my stomach hurt.”

Locked in a constant cycle of her eating disorders, Lindsey desperately needed help but didn’t know how to get it.

“It became so engrained in my lifestyle, this whole eating disorder mentality, that I didn’t think I would ever get out of it on my own and so I just was waiting for someone to come save me.”

Living in New York City at the time, Lindsey started seeing a therapist, who she is still in contact with today - but the therapist warned Lindsey she needed more intense medical treatment and to tell her parents.

She now exercises and eats in moderation and blogs and speaks publicly about her recovery journey.

Stored in shoeboxes in her childhood closet at her parents’ home, Lindsey keeps her old food diaries as a reminder of how far she has come.

“I read these diaries and they just give me good perspective on where I am now. I don’t even recognise the girl in them,” she added.

To learn more about Lindsey’s story, go to https://ihaventshavedinsixweeks.com/ 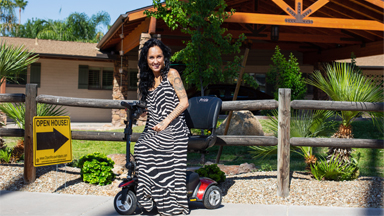 I Hid My Eating Disorder For 8 Years